Live Under The Arch 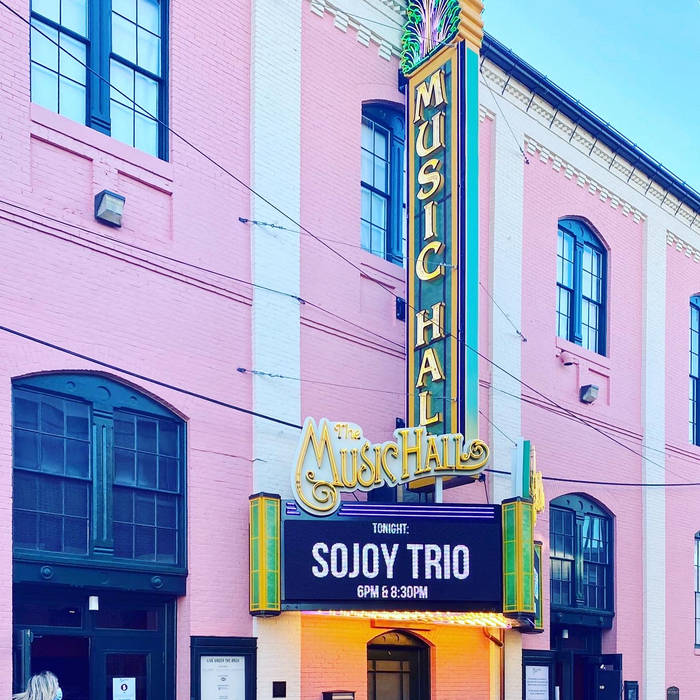 This is from the late set, recorded live in concert under the Music Hall Arch in Portsmouth, New Hampshire, Sunday August 30, 2020.

All compositions by Jonny Peiffer, except 'Water From An Ancient Well' by Abdullah Ibrahim. 'If Up's The Word' is composed by Peiffer, words by E. E. Cummings.

The video footage from this entire set is available for viewing on the Jonny Peiffer YouTube channel - or by searching "Sojoy Trio 'Live Under The Arch'" - or at Facebook.com/sojoymusic. Special thanks to Amanda Kowalski for capturing video of the event, and subsequently the audio you hear here.

To view an upcoming streaming concert from the Sojoy Quintet (this trio plus Barry Saunders on reeds and Scott Kiefner on Bass) on Saturday, March 13, go to seacoastmusicsupport.com to get your tickets for the Winter Warmer series.

More about this group playing this music:

Due to forces already in motion prior to the pandemic, though exacerbated by the lockdown, a paring down of the larger group has been an inevitable focus of the next phase of Sojoy. The trio heard here is perhaps the most extreme version of that paring down, Effenberger essentially replacing 5 members of the band, simultaneously taking up the roles of bass-player, embellishing the harmonic elements, and at many points taking the lead. The smaller group affords much more flexibility of interaction and extemporaneous exploration while compromising very little of the overall sound.

'Water From An Ancient Well' is a tune by the great jazz pianist and composer Abdullah Ibrahim, from an album by the same name. It has a quite soulful, plaintive organ intro, that gives way to an easy, breezy funk.

'Wing and Fin' is from the set of tunes by Peiffer written for the constellations on the 'Ambistellar' albums, in this case for the constellation Volans, the flying fish. The melody is intended to invoke a sort of follow-the-leader feeling of schools of fish or flocks of birds, and also the motion of leaping out of, and eventually returning to after briefly taking flight, the water. The solo section consists of trades back and forth between Lange and Effenberger wherein each soloists sets up the next harmonic shift, previously unknown by the other, in a back and forth of perpetual discovery. In other words, a game of follow-the-leader in which the leader is constantly shifting.

'Bird of Paradise' - another composition from the 'Ambistellar' series for the constellation Apus. Part Ellingtonian tango, part homage to Tchaikovski's 'Arabian Dance' from the nutcracker, the tune marks the elegant mating ritual of the magical birds.

'Usa Major/Funky Fungi' - This is a medley of two tunes by Peiffer, the former from the 'Ambistellar' series inspired by the Big Bear/Big Dipper, and the latter from 'The Adventures of Oliver Z. Wanderkook.' 'Ursa Major' caricatures the lumbering bear right before hibernation, and 'Funky Fungi' captures a lucid, even psychedelic dream, perhaps brought on by a mid-winter snack of magic mushrooms.

'Big Bad' - another constellation from the 'Ambistellar' series, Lupus, the Wolf. Lupus may get a bad rap throughout history as a bully, but he's still dangerous and a bit of a badass. The tune begins as a slow bluesy shuffle, but escalates to full Afro-Cuban glory.

'If Up's The Word' - the oldest Peiffer composition in this set, written for the E. E. Cummings poem that starts 'if up's the word; and a world grows greener.' The poem is written in a triplet metre, so the slow 6/8 groove mirrors that, though the words are delivered loosely and out of time. The melody, while never straying far from it's original statement by the organ, is never heard the same way the six different times we hear it over the course of the tune. It is an anthem for the Spring spirit, may it always be present in our lives, whenever needed or appropriate.

Thank you for listening - Jonny