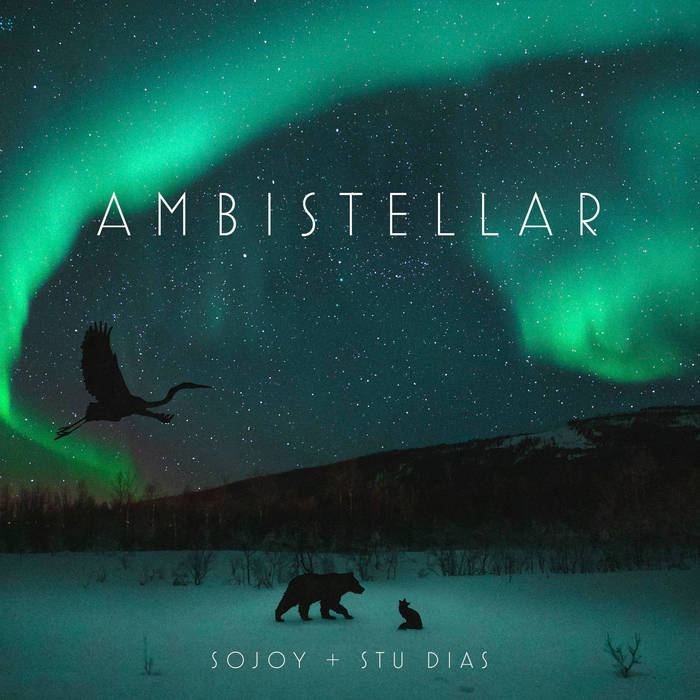 Use Promo Code: SOJOY2020 for 20% discount on all Sojoy purchases through the end of December 2020.

"There are so much [sic] musical influences and references here, but without losing track of the essence of the stunning compositions – sounding sometimes like a straight jazz ensemble, then like a funk band or a small ensemble supporting the vocalist. Stunning arrangements, the overall playing and the vocal performances (and lyrics) are outstanding." - Wulf Muller wulfmuller.wordpress.com/2020/06/26/soundtracks-for-our-times/

"If you’ve spent a lick of time with anything Sojoy’s done in the past, you know what you’re potentially getting into here. In collaboration with Stu Dias who drops his vocal prowess on much of the record, the horn-fueled, jazzily funkified rhythmic lifeblood that is Sojoy has made, dare I say, another absolute marvel of aural pleasantry here. A masterwork in musical movement(s).

"To top it all off, the artwork, crafted by Sara Argue, is breathtaking and pulls you right in while the music permeating from your stereo speakers fastens you right in place." - Chris Hislop, Portsmouth Herald www.seacoastonline.com/entertainment/20200505/sojoy-to-celebrate-new-album-with-livestream-listening-party-may-9

The constellations are celestial calligraphy. They are stories written in the stars and are one of the only things that connect us to ancient Rome, the Mayans, and the Ottoman empire, for we experience them largely in the same way the civilizations before us did. We map our lives and beliefs on to them. In turn, they guide us, marking time and space. These are their stories. These are their dreams. These are their prayers.

The Serpent Bearer. The 13th Zodiac. It straddles the celestial equator. There are many accounts of its origin, but there is some writing that indicates it descended from Babylonian astronomy and may represent Nirah, a serpent god. There is something dangerous and wry about it.

The Wolf. Located in the deep southern sky, this constellation was one of the 48 constellations listed by the 2nd-century astronomer Ptolemy. The wolf has been a victim of massive societal misperception. The fearsome, loathsome aura that follows these animals through fairy tales, folklore, and mythology often reduce these beautiful animals to villains. While dangerous, they are also fiercely loyal and intelligent.

The Flying Fish. The first depiction of this constellation in a celestial atlas was in Johann Bayer's Uranometria of 1603. The flying fish convey the idea of transition. Able to move from sea to air even if just for a moment. There is a buoyancy and an elasticity to them that makes them almost mystical examples of adaptive evolution.

Grus is a constellation in the southern sky. Its name is Latin for the crane. The beauty and gracefulness of cranes, as well as the fact that some crane species migrate, conjures a pensive solitude. There is a beauty in not knowing whether a seasonal migration will be your last.

Orion is a prominent constellation located on the celestial equator and visible throughout the world. It is one of the most conspicuous constellations in the night sky.

In Greek mythology, Orion was a mighty hunter and hunted with the goddess Artemis, and his dog Sirius. He threatened to kill every beast on Earth. Apollo, disapproving of his sister's relationship with a male objected and sent a giant scorpion to kill Orion. The creature succeeded, and after his death, the goddess asked Zeus to place Orion among the constellations. Zeus consented. This constellation speaks about the loneliness one would feel if their primary purpose was taken away. Orion was once the greatest, and now, he dreams of the mighty hunter, for that is the only way he can experience his sole purpose.
Vulpecula

The Constellation Vulpecula lies in the northern sky. Its name means “the little fox” in Latin. It is not associated with any myths but conjures images of joyful little foxes playing at springtime, glad that the winter is over. Dreaming of the long beautiful summer that is to come. This is something many of us dream of now.

Ursa Major and Minor( The Great and Little Bears respectively) are constellations in the northern sky. The tragic myth surrounding them gave us so much room to create, channel, and mine.

Zeus Lusted after a young Nymph named Callisto. Hera, Zeus's jealous wife, discovers that Callisto has a son named Arcas, and believes it is by Zeus. Hera then transforms the beautiful Callisto into a bear so she no longer attracts Zeus. Callisto, while in bear form, later encounters her son Arcas. Arcas almost shoots the bear, but to avert the tragedy, Jupiter turns Arcas into a bear too and puts them both in the sky, forming Ursa Major and Ursa Minor.

Ursa Major; Longing to be recognized by her son, Ursa Minor; exploring, conquering, and guiding sailors and conquests, yearning to be remembered. The pair of bears show us how wide the emotional spectrum really is.

A big THANK YOU to all of our Celestial Boosters:
Karly Nihal and Evan Karatzas, the Mahoney family, Frank and Ingrid Getman, Julie, Joe and Emily DeFilice, Elizabeth Callahan and Liz Lake, Colleen and Clem Madden, Mike and Rebecca Harrison, Beverly James and Patrick Daley, Tom, Merrill and Henry Peiffer, Tina Overton Peiffer, Tucker and Baba Overton (from above), and the anonymous donors who supported this album.